How To Use a Fire Extinguisher

Fire is a terrible disaster. Dealing with it is not easy, and one of the most effective ways is to use fire extinguishers. You should learn how to use them in advance so as not to waste time at a critical moment.

Fire safety provides for equipping production and other facilities with universal fire extinguishers – powder (OP) or gas – freon (OH) or, which happens more often, carbon dioxide (OC). The methods of handling them are similar, but at the same time have their own characteristics.

TO ACTIVATE THE POWDER FIRE EXTINGUISHER YOU NEED

It should be borne in mind that during the operation of the device, a dust cloud forms, which makes breathing difficult and impairs visibility.

TO START OPERATION OF THE CARBON EXTINGUISHER

Do not hold the fire extinguisher by the bell, as when the gas runs out, its temperature drops sharply, dropping to -70 ° C.

It must be borne in mind that the carbon dioxide released during extinguishing is not suitable for breathing, therefore, without protective equipment, a person will hold out in such an atmosphere for no more than 2 minutes. Usually this is enough, and then loss of consciousness is possible.

Working with a fire extinguisher

When working with a fire extinguisher, you must adhere to the following rules:

Self-triggering powder fire extinguishers are used to automate the fire extinguishing process. Fire-extinguishing powder tanks are located close to potential fire sites. When the temperature of the device rises above the threshold value, the reservoir collapses and the powder covers the flame, cutting off the access of oxygen. It is convenient and safe.

The principle of operation of such fire extinguishers is also due to their main drawback. From time to time, they falsely trigger in response to an increase in air temperature – from the sun or heating equipment. To prevent situations of this kind, it is worth establishing an optimal temperature regime in the room.

As you know, it is easier to prevent a fire than to extinguish it. And for this it is necessary to observe safety rules, including to monitor the condition of fire extinguishers and keep them in full readiness for work. 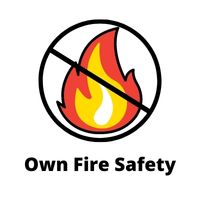